It’s not surprising that as the weather starts to heat up, the condo market continues its steady boil, with demand for condominium projects that offer transit-centric locations, luxurious designs and dynamic amenities continuing to set new records with every launch.

While sale results are scorching heading into the summer, the only thing hotter is the anticipation levels among brokers, agents and their clients for the next condo super-launch.

“The recent success of condo launches across the GTA, from Mississauga to Vaughan, are demonstrating that not only is the condo market not slowing down, but projects are reaching near sell outs, faster than ever,” says leading Toronto sales and marketing professional Barbara Lawlor, of Baker Real Estate. “But, even though the market is breaking new ground, some age-old principles of economics still apply, including the law of supply and demand.

“It’s playing out before our eyes,” Lawlor adds. “With every sale of a unit in a new project, there’s a list of buyers left out, unable to secure the home of their dreams. This has led not only to unparalleled sales, but never-before-seen levels of excitement for the next new project.” 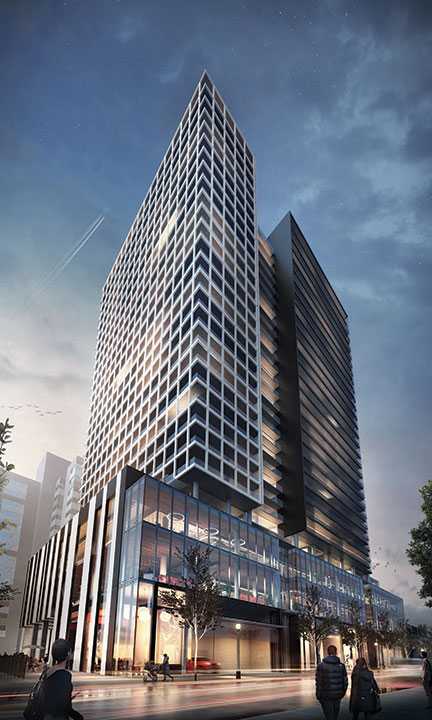 Lawlor’s right, as the market is primed and ready for what is anticipated to be the project-of-the-year – Lifetime’s Panda Condos, expected later this fall.

Given its iconic location just steps from Yonge-Dundas Square and Ryerson University, Panda Condos is now in the final stages of the city’s planning process, and its developers are expecting to introduce the 30-storey, architectsAlliance-designed tower, which will feature interior designs by the award-winning Cecconi Simone, just a few short months from now.

Currently accepting pre-registrations, the excitement for the launch of Panda is building.

“We’ve received overwhelmingly positive responses to Panda so far, and are thrilled by the market’s reaction to a project we haven’t even begun to market,” says Brian Brown of Lifetime Developments. “This is in large measure due to the iconic location and signature opportunity to design a project at the heart of Canada’s most dynamic intersection – Yonge and Dundas. We appreciate how special the site is, and recognize how this location demands an exceptional approach, which is why we have curated a team of award-winning professionals which represents the best in modern architecture and interior design.

“The teams at architectsAlliance and Cecconi Simone have, in our opinion, created something timeless and unique that will be an incredible addition to Toronto’s skyline. We can’t wait to introduce their efforts to the market.”

Peter Clewes, architectsAlliance principal, has designed a building that places emphasis not just on what is happening in the sky, but also what happens at ground level. “Panda will make the street more pedestrian-friendly and vibrant,” says the architect. “The transparent, open ground floor will contrast with the opacity of the other buildings lining Edward Street, while the corner café space will animate the mid-block walkway between Edward and Elm Street, creating a much warmer neighbourhood character away from Yonge Street.” Describing the tower itself, Clewes adds that its “graphic character will operate on a different scale, cutting through the visual ‘noise’ and giving the project impact on Yonge Street.”

As with any design-focused project, the relationship between exterior architecture and interior design is key both to the aesthetic success of the project, but also to the livability and holistic experience of living, visiting or working in the building.

This relationship was key in inspiring the design work of Cecconi Simone, which founding partner Anna Simone notes was very much influenced by both the architecture, and the branding of the project (created by agency of record, Montana Steele).

“There’s a seamlessness between the architecture, branding and interior design at Panda,” says Simone. “Where one discipline ends, another begins. Driven to address the duality of design, in which modern spaces must be multi-functional, we have pushed ourselves to redefine living for today’s consumer. Not merely limited to personal spaces, but with the design of the amenity and common spaces as well, we have sought to extend our approach to how today’s condo residents truly live.

“By understanding the target consumer – young Millennials – we have created spaces to be social, communal and interactive, functioning as an extension of the end-user.”

With a team of industry-best consultants doing some of the best work of their careers, and a site which boasts the best location in the city, it’s no wonder that excitement – and not just the temperature – is rising this summer.

Get on the list to be one of the first to get details about the market’s hottest launch yet – the launch of Panda Condos.